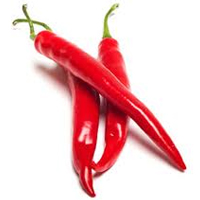 Shape: Long and thin with a sharp point

Click here to check out hot sauces made with Cayenne Peppers